Wicklow Sinn Fein has launched a Wicklow Christmas shoe box appeal for the homeless. Wicklow TD John Brady said he hopes as many people as possible will take the opportunity to contribute if they can:

“While many of us are starting to buy Christmas presents and buying all the trimmings for our festive dinner, it's important to remember that this is a time to give to those who might not be looking forward to the same kind of Christmas. For some people it's the roughest, toughest and coldest time of the year. With almost 9,000 people now homeless including 3,500 children, the Wicklow Sinn Fein team will be doing all we can to help those that need it the most, that’s why we have launched our Shoe Box appeal.

“We are asking the people of Wicklow to do your bit and grab a few things to put in a shoe box for the homeless this Christmas. It couldn't be easier to get your hands on these bits 'n' bobs and to put them in a shoe box and wrap them up and you'll make someone's Christmas.

Teachta Brady said that he hopes as many people as possible will contribute to the shoe box appeal:

“We have two main drop off points which are the Sinn Fein offices in Bray -1st floor 27 Main Street. Ph: 01 2762623 or Arklow - 18a Upper Main street. Ph: 0402 41853. People can also contact any of our public representatives for further information on how to contribute”. Ends 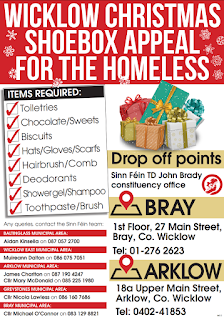 Raising the issue on the floor of the Dáil today, Teachta Brady said:

“Today, I raised the issue of the need for proper Government funding for cancer support services if these services are to survive. I highlighted the scenario currently faced by Purple House Cancer Support in Bray who are consistently depending on the goodwill of the people of Wicklow to fund their vital services.

“This is totally inadequate and furthermore it is totally unsustainable. The work done by Purple House Cancer Support is crucial, the services they provide through counselling, advice and guidance and transport services for people attending hospitals for treatment.

“In Ireland, we know that every three minutes, a person is diagnosed with cancer. We also know that every year there are more than 165,000 people living with and beyond cancer. In 2016 alone, Purple House had more than 1,200 people visit their Cancer Support Centre in Bray and outreach support service in Dun Laoghaire.

“Purple House Cancer Support services not only serve the needs of people living with cancer in the community, they also compliment the implementation of wider Government policy on social inclusion, health promotion and strategic cancer supports. Yet, the funding provided by the Government does not reflect all of this work.

“I am calling on Minister Harris to provide the necessary funding beyond the current 23% of funding currently being given to Purple House. Minister Harris must ensure that funding for Purple House Cancer Support Services form part of the HSE Service Plan for 2018.”
Posted by John Brady TD at 00:10 No comments:

Sinn Féin TD for Wicklow/East Carlow John Brady TD has secured significant progress in the reopening of the courthouse in Wicklow Town.

“Having made a comprehensive argument to Minister Flanagan on the need to reopen the courthouse in Wicklow Town, I received an update from the Minister today.

“During discussions with Minister Flanagan he now intends on moving it to the next Public Private Partnership bundle which will mean work should commence as early as 2018. Despite, the Minister recognising that there are some technical issues he is hopeful that these can be overcome. This is a very welcome move on the part of the Department of Justice & Equality after extensive lobbying.

“The reopening of the courthouse will mean much more than providing additional court services for the County, it will also bring life back into the town particularly, in the market square.

“We know that the current court service which is based in Bray is bursting at the seams.

“Minister Flanagan has assured me that detailed information on his Department’s plans in relation to Wicklow courthouse in writing will follow our discussion today.

“I look forward to this formal confirmation from Minister Flanagan in delivering the reopening of Wicklow courthouse as soon as possible.” 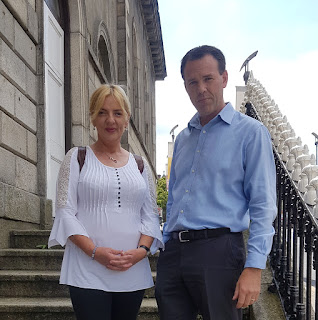 On foot of figures obtained by Wicklow and East Carlow TD John Brady, the Sinn Fein spokesperson for social protection has said that it is an absolute disgrace that we have families literally freezing in homes with no adequate heating systems across Wicklow.

“I recently received statistics from Wicklow County Council which confirm that 685 local authority homes in Wicklow have no central heating system installed. I am rarely stuck for words but my jaw dropped when I discovered that 15% of Wicklow local authority housing stock does not even have the most modest of modern heating systems.”

The Sinn Fein TD lashed out at Fine Gael and Fianna Fail and accused them of subconsciously conspiring to deprive the local authority of the funds necessary to rectify the situation:

“The fiscal failures of successive Fine Gael/ Fianna Fail governments expose a malevolent ignorance which defies all logic. Families are literally freezing in homes while paying rent to Wicklow County Council for the pleasure. I have written to minister for housing Eoghan Murphy asking that funds be made available immediately to rectify the situation.”

Teachta Brady said the Sinn Fein team on Wicklow County Council will be pressing the issue as a matter of urgency:

“Our three Councillors - Nicola Lawless, Michael O’Connor and Mary McDonald will bring as much pressure to bear as possible at council level in the chamber and with officials. We want to secure funding for a heating refit programme to be included in the council budget. These homes which house families with young children, older citizens and those with disabilities are hardly fit for purpose in the absence of satisfactory heating systems.”

In conclusion Teachta Brady said that the issue further highlights the accuracy of a recent European report which accused the government of human rights violations when it comes to public housing standards:

“The esteemed European Committee of Social rights produced a report which found the state at odds with its responsibilities under the European social charter. It further accused the state of breaching its obligations in line with European and International housing standards. Such reports usually end up in the governments ‘ignore’ tray but it is my intention to press the government to address this outrage immediately both locally and nationally.”
Posted by John Brady TD at 07:42 No comments:

Sinn Féin spokesperson for Employment Affairs & Social Protection John Brady TD has said that the actual number of older people affected by the 2012 pension changes is 42,278 as opposed to the 35,000 stated by Government.

Speaking after receiving a reply to his Parliamentary Question on the matter, Teachta Brady said:

“The Department’s own records show that 42,278 pensioners have been affected by the rate band changes introduced by Fine Gael and Labour from September 2012. Of this figure, 26,598 are female and 15,680 are male.

“I sought a breakdown of the number of men and women affected by the 2012 changes as well as a breakdown by County which shows that 10,514 of these pensioners live in Dublin, 7,116 women and 3,398 men.

“At no stage in all of the discussions on this issue did Minister Doherty disclose the actual number of people impacted by the 2012 changes, despite her own Department having the figure. Instead, the Dáil was misled on this.

“The fact is that 42,278 pensioners are receiving a reduced State Pension as a direct consequence of changes made to the calculation of the State Pension is outrageous. Fine Gael and Labour took this decision with the absolute knowledge that women would be disproportionately impacted and this is evident in the fact that almost two-thirds of the 42,278 pensioners are women.

“The Social Welfare Bill 2017 is due to go before Cabinet next week. We need to see the Minister’s plans to rectify this discrimination in this Bill. If it is not there, Sinn Féin will amend the Bill and we fully expect Fianna Fáil to support such an amendment given their recent Dáil motion calling for action. This issue needs to be addressed immediately, 42,278 pensioners are waiting.” ENDS

Sinn Féin TD for Wicklow/East Carlow John Brady has welcomed the completion of flood protection works at the Dargle River in Bray.

Speaking after an official visit by the Minister of State for the Office of Public Works and Flood Relief Kevin ‘Boxer’ Moran to view the works carried out, Teachta Brady said:

“The people of Bray have been calling for flood protection works to be carried out on the Dargle River since 1986 when Bray was devastated by Hurricane Charley. While, these works were long overdue, I welcome their completion today.

“I have stood with the community of Little Bray on ensuring that their community is protected from any further risks of flooding. I want to commend the local community group SWAP for keeping the issue of the floodplain at the Dargle River to the fore. These works would not have been delivered without their determination and work on consistently highlighting the issue.

“While, this substantial investment in Bray is welcome, the campaign continues to keep the floodplain adjacent to the Dargle River free from development. I have brought this issue to the attention of the Minister of State, Kevin ‘Boxer’ Moran today and I have given him a letter on the matter.

“The completion of the flood protection works is a welcome development but we cannot jeopardise these works by allowing the construction of high density buildings on the floodplain. This development can easily go ahead on the higher grounds of the old golf course lands.”